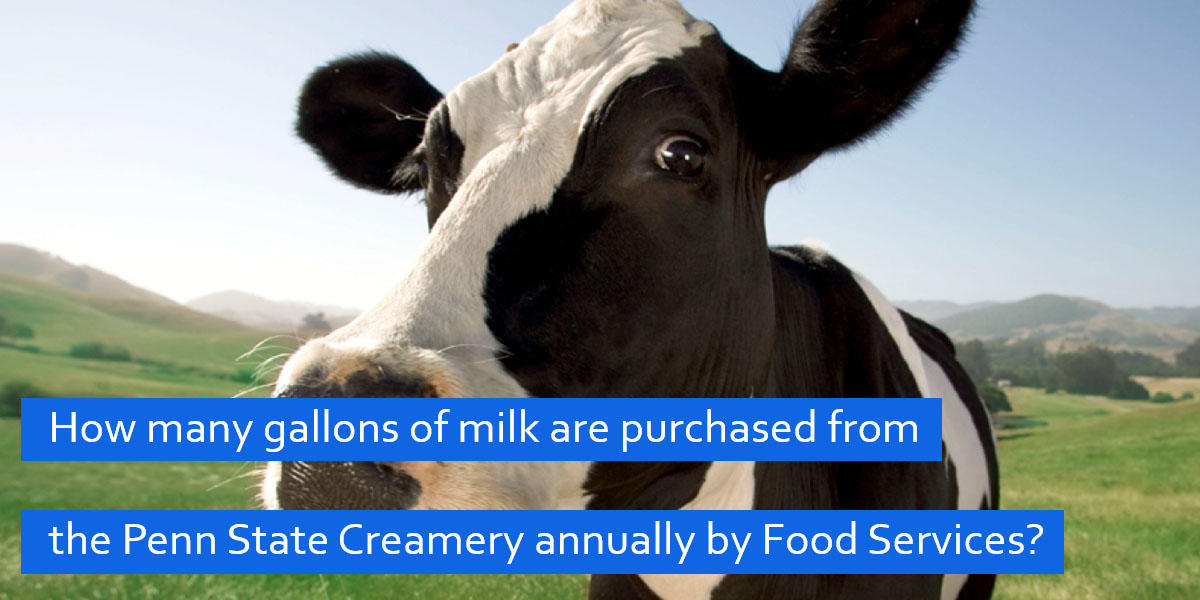 Over the last 10 years, Internal Audit with a departmental full-time staff of 12, has hired 21 Penn State student interns.

17,300 espresso drinks are made at the HUB Starbucks per month.

23,450 smoothies are made at the HUB Jamba Juice per month.

Over 132,000 gallons of milk are purchased from the Penn State Creamery annually by food Services.

More than 1.47 million gallons of Jet A fuel are pumped annually at University Park Airport.

Penn State Bradywine opened in 1967. It is the youngest Penn State Campus.

90,000 dozen cookies are baked at the Penn State Bakery a year.

Campus Dining serves 1.4 million meals per semester and approximately $85 million in sales per a year.

Over 15 million people have visited the Bryce Jordan Center. That's more than the population of New York and Los Angeles combined.

2016 was Penn State Harrisburg's 50th Anniversary. The opening of the Student Enrichment Center marked the event.

283,237 packages were processed for students during last year at the residence hall commons desks.

The Scranton campus is named in memory of Worthington Scranton, founder of the city of Scranton.

Garage Services can provide maintenance for all the University's 2,200 vehicles and machines.

Prior to 1986, Penn State's Human Resources was known as the Office of Personnel Administration (OPA).

In 2017, University Park produced 20,176 tons of solid waste, but 62% of it was diverged from landfill. 4,620 tons was recycled and 7859 tons of organic material was manufactured into compost or mulch.

OPP maintains 54 miles of roads and 85 miles of sidewalks.

Over 90% of the paper used at the Multimedia and Print Center has recycled content.

Twenty years ago, OPP started replacing (planting) at least one tree for every one lost and have since nearly tripled that ratio and have planed close to 10,000 trees.

Penn State New Kensington has a replica of an operating room and emergency room on its campus.

The south side of the Penn State Beaver Campus was an ice farm through the 1920's.

Residential students at the Commonwealth Campuses represent about 60 countries all over the world.